A shifter fighting for his place in the Feral Breed…
A witch searching for a place in her coven…
A love that breaks every boundary.

Only ten years into his new life as a wolf shifter, Feral Breed MC prospect Pup is struggling to find his place. A throwaway kid in his human past, the only time he’s ever felt at home is when he’s riding with his Breed brothers. But a mistake that nearly ended the life of his leader’s mate haunts him, and he’ll stop at nothing to prove his worth.

Orphaned at birth, Azurine and her sisters have been raised on string magick, grimoires, and the strength of the elements around them. Growing up surrounded by the witches in their coven, there’s never been a lack of a maternal element to support her. But she’s always been the “middle Weaver,” forced to accept the coven’s refusal to see the girls as anything other than the Weaver triplets.

When a witch hunter invades the coven’s home, the witches lash out at the nearest suspect… and one of their own. Betrayed by her coven, Azurine must choose between the only family she’s ever known and the man fate tied to her soul. And as Pup tries to earn the respect of his club, he makes a decision that could cost him more than his place in the Feral Breed. It could cost him Azurine. Or his own life. 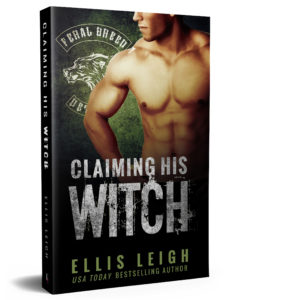 You're viewing: Claiming His Witch Paperback $12.50
Add to cart