A shifter living a life hindered by regret…
A woman praying for a chance at a future…
A moment of fate that refuses to be denied.

The fourth book in the Feral Breed Motorcycle Club series.

Beast of the Feral Breed has spent years avoiding interacting with people. Other than the two shifters he considers family, his life has revolved around the engines he loves to work on, the ink he decorates his body with, and the scars of a past he wishes he could forget. When a witch shows him a vision of his future—one with a family he knows he can never have—his solitary life implodes, and he embarks on a trip that drops him exactly where he doesn’t think he should be.

Calla wants to escape the hell she’s living, but between her low-paying job and the danger lurking in the woods, running alone isn’t an option. Desperate, she spends her time praying for someone to help free her from a life she fears will be cut short. The human woman never realized the dangers of dating a wolf shifter…until he showed his claws.

When Beast falls into Calla’s life, he’s more than a little surprised to meet his mate—a woman he knows he should walk away from. But danger hovers around every corner, and Beast refuses to leave her vulnerable. Protecting one human woman wouldn’t be a challenge, but Beast has to battle his past mistakes, stay under the radar of the local pack, and rescue two people he never expected to love. One of whom has yet to take her first breath. 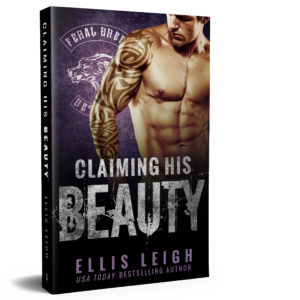 You're viewing: Claiming His Beauty Paperback $12.50
Add to cart