A shifter waiting to end it all…
A woman living her life surrounded by death…
A destiny few could survive.

Jameson craves death. Former president of the Four Corners Feral Breed den, he’s abandoned his post and left behind his brothers to escape the worst day of his life. The day he saw his mate—a woman he’d never met—lying dead on a concrete floor, leaving him with nothing to live for except the fight to rescue the kidnapped Omegas and haunting visions of seducing the woman he failed to save.

Aoife sees dead people. Lots of them. The necromancer does her best to help them transition from one plane of existence to the next, but they don’t make it easy on her. Neither do the visions of blue eyes that have been torturing her for the past year, eyes she swears she’s seen before, belonging to a man who fills her dreams with passionate adventures and a desperate longing no one else can satisfy.

A psychic’s dream takes Aoife on a cross-country journey that leads her straight into the battle at Merriweather Fields…and the path of her mystery man. When Jameson realizes his mate is very much alive—most of the time—his renewed zest for life leaves him in a treacherous predicament: protect the men and women of his breed, his friends and Feral Breed brothers, or keep the woman fate says is his perfect match out of harm’s way.

Loyalties shift the landscape and not everyone can find their way across when Death comes out to play in this final, full-length installment of the Feral Breed series. 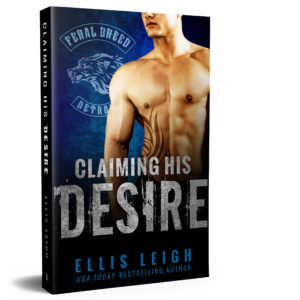 You're viewing: Claiming His Desire Paperback $12.50
Add to cart