A shifter battling his wolf instincts.
A woman living a life of obligation and lies.
A moment of fate interrupted by danger.

Book one in the Feral Breed Motorcycle Club series.

Rebel Lynch has spent two hundred years searching for balance between his human side and his inner wolf. As a den President of The Feral Breed Motorcycle Club, a lack of control over the beast within isn’t just a pain in the ass, it’s a death sentence. One served by his club brothers: the judges, jury, and executioners of the wolf-shifting community.

At Amnesia Gentlemen’s Club, customers and staff check their real-world identities at the door. Charlotte, one of the club’s best waitresses, ditched her legit career in corporate IT because she needs the kind of income those pesky IRS folks can’t track. When the smart-mouthed bombshell pulls a gig serving a private party, she expects nothing more than a few extra tips. That is until dirty-talking Rebel Lynch strolls into the room looking like sin incarnate, flashing motorcycle club colors, and blasting Charlotte’s expectations about work, life, and love straight to hell.

One glance at Charlotte and Rebel knows she’s his fated mate. But a wolf shifter is attacking women at the club, threatening Charlotte’s life, and putting the entire shifter community at risk of exposure. Rebel and his Feral Breed MC brothers must find the crazed shifter before he strikes again. If Rebel can’t uncover the new monster in their midst—and learn to rein in the protective instincts of a fully mated Alpha—his future with Charlotte will be dead on arrival. 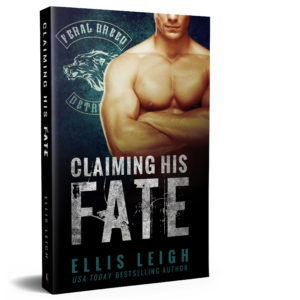 You're viewing: Claiming His Fate Paperback $12.50
Add to cart