He waited four hundred years for her…
She only ever wanted to find her mate…
Their time has come.

Gates is a legend among his fellow wolf shifters. For more than four centuries, he’s lived without a mate, something nearly unheard of in his breed. He’s spent that time mastering the art of the kill, becoming a lethal weapon for the Feral Breed Motorcycle Club, and earning a reputation as the Gatekeeper.

Kaija Wariksen grew up as the Valkoisus pack princess. The Alpha’s only daughter and a powerful Omega shewolf, Kaija’s beauty and place within the pack hierarchy makes her the focus of desire for many of the unmated males, especially one she’s desperate to stay away from. She’d rather wait for her fated mate than be just another bed warmer for a man with more attitude than brains.

But when a territory dispute turns into a kidnapping, Gates and his Feral Breed brothers are called to assist the Valkoisus pack in a rescue operation. Gates soon discovers there’s more in store for him than a fight. He finds his mate in the Alpha’s daughter, a woman targeted by a mystery sect kidnapping Omega shifters. To keep the Valkoisus pack safe, the Feral Breed must put Kaija in danger, risking the only thing Gates has ever needed, and igniting a rage that could destroy the entire wolf shifter population. 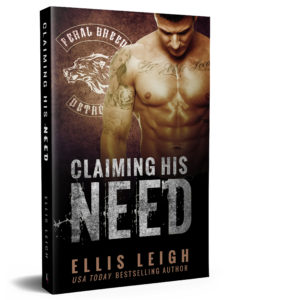 You're viewing: Claiming His Need Paperback $12.50
Add to cart